Not to be confused with the Nerf N-Strike video game.

N-Strike is a series of Nerf blasters and products that began in 2003.

The N-Strike series consists of blasters and products with a "tactical" theme to them. A majority of these blasters use a number code to categorize them into different blaster types, including air-powered blasters, revolver-style blasters, clip-fed blasters, and more.

These blasters support use of additional accessories, notably through the tactical rail platform, compatible with a number of different accessory types, including flip-up sights, scopes, shields, grips, and more. A similar platform built into the muzzle and rear of a blaster support detachable barrel extensions and shoulder stocks, respectively.

N-Strike also began the trend of a uniform clip style, the clip system, which allows multiple clips and drums of any size to be loaded into any compatible blaster.

The N-Strike series may have gotten its name from its first product released: the 2003 Unity Power System. This blaster set, upon its release, was only known as N-Strike. 2004 would see further blasters and products released, with proper names and the series name of N-Strike.

N-Strike would be directly succeeded by the 2012 N-Strike Elite series. A number of N-Strike blasters either received a direct upgrade or a similar successor, in order to match the new seventy-five foot firing range standard that N-Strike Elite began. Despite the move to this new series, some blasters and products were released under the N-Strike name in certain parts of the world.

The series was quietly discontinued in 2016. In 2019, N-Strike was revived for the ICON Series, which features re-releases of N-Strike blasters for Nerf's fiftieth anniversary.

Originally called Clear the Way, the Clear Series was introduced to promote the then-upcoming Stampede ECS. The sub-series features blasters made with translucent, clear plastic, which allows the user to see the orange internals of a blaster.

The ICON Series celebrates Nerf's fiftieth anniversary with re-releases of memorable, "iconic" blasters. While the series retains the original color scheme of the blasters, some feature upgrades to stand alongside modern blaster conventions (such as being able to hold Elite Darts).

The Gear Up sub-series was released to help promote the then-upcoming Vortex series. It features blasters with an orange and black color scheme; additional black designs were added to decorate the blasters. Blasters also came packaged with a single XLR Disc.

Main article: Light It Up

The Light It Up sub-series was part of both the N-Strike series and the Vortex series. The Rayven CS-18 was released under this series and featured the use of glow-in-the-dark darts.

The Red Strike sub-series features blasters with a red and orange color scheme. The series is notable for being for sale at Walmart for Black Friday 2009; because of their rarity, the blasters are coveted by collectors.

Like the Sonic Series before it, the Sonic FIRE series features blasters made with translucent red plastic, which allows the user to see the internals of the blasters. The Barrel Break IX-2 and the Jolt are the only N-Strike Sonic FIRE blasters.

A successor to the Sonic Series, and a counterpart to the Sonic FIRE series, the Sonic ICE series features blasters made with translucent blue plastic, which allows the user to see the internals of the blasters. The Jolt is the only N-Strike Sonic ICE blaster.

The Sonic Series features blasters made with translucent green plastic, which allows the user to see the orange internals of a blaster. The Sonic Series is the largest re-release N-Strike sub-series.

The Whiteout Series features blasters with a white, black, and orange color scheme. Whiteout re-releases are known for having slightly improved performances compared to their original N-Strike counterparts.

The N-Strike logo from 2009 to 2013. This would also be seen on ICON Series releases of N-Strike blasters. 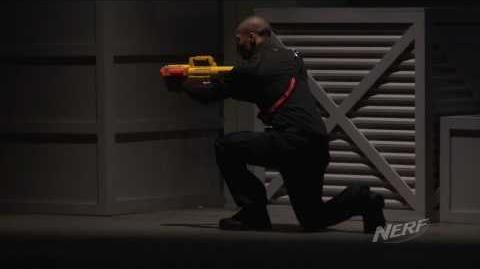