The MotoStryke is a Nerf blaster that was released in fall of 2020 under the N-Strike Mega series. It requires four "C" batteries to be operated.

It comes packaged with a clip, ten Mega Darts, and instructions.

It is compatible with the Centurion six dart clip and the Buzz Bee Air Max twelve dart clip.[1]

The MotoStryke was first leaked online in early 2020 in the form of online listings without images. In late February of that year, official images were released for this, the Finisher XX-700, and the GhoulGrinder. The packaging for the MotoStryke.

The back of the packaging for the MotoStryke. 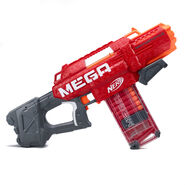