The Monorail Blaster is a Buzz Bee blaster that was released in 2017 under the Air Warriors series.

The Monorail Blaster is a long pump-action blaster. It has a "transparent rail chamber", allowing the user to see the loaded dart and the internal mechanisms that fire it. Up to five darts can be loaded into the internal magazine mechanism, lining the darts up in single-fire; priming the blaster auto-advances darts into place to be fired.

It has a single, slotted accessory rail on top. This rail is aesthetically different from other Buzz Bee rails, and bears more similarity to a Nerf RIVAL tactical rail or a Picatinny rail; nevertheless, it is still compatible with Buzz Bee rail accessories such as the such as the Heatseeking Scope. It also features a jam door just under and behind the muzzle.

The Monorail Blaster was first shown off at the 2017 Toy Fair as the Rail Blaster. The blaster was renamed prior to its release and some stock photos still refer to it as the "Rail Blaster". The original Rail Blaster's pump handle was slightly different than the production model.

It was re-released with a new color scheme as the Rail Raider. This re-release would be later renamed back to Monorail Blaster.

The Monorail Blaster has been released with the following color schemes:

To reload the Monorail Blaster, flip up the orange piece located at the rear of the blaster. Load up to five darts into the uncovered hole, then flip the piece back down in place. Pull the pump back and push it forward to fully prime the blaster.

Pull the firing trigger to fire a dart. 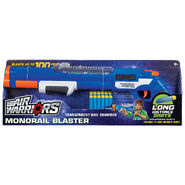 The packaging for the Monorail Blaster.

A stock image of the planned Rail Blaster's packaging.

The packaging for the Rail Raider. 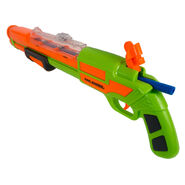 The Rail Raider being loaded.
Add a photo to this gallery

Retrieved from "https://nerf.fandom.com/wiki/Monorail_Blaster?oldid=189061"
Community content is available under CC-BY-SA unless otherwise noted.