The Modulus ECS-10 is an electronic clip system Nerf blaster that was released in fall of 2015 under the N-Strike Modulus series. It requires four "AA" batteries to be operated.

It comes packaged with a Targeting Scope, a Storage Stock, a Dual-Rail Barrel, a Drop Grip, a banana clip, and ten Elite Darts.

The Modulus is a semi-automatic, clip-fed blaster. It is unique in that, with its included accessories, it can be configured, equipped, and used in over thirty different ways. It features five tactical rails, an integrated carry handle, and barrel extension and detachable shoulder stock compatibility. Similar to the Demolisher 2-In-1, the clip release button is located just behind the clip well, in front of the firing trigger.

The Modulus was re-released with a few changes to its shell and accessories; notably, the grip was made to be slightly more ergonomically and comfortably, and the shoulder stock was made sturdier.

In 2019, the Modulus was re-released as the Tracker ECS-10, which features a camouflage-style color scheme and different included accessories.

It was re-released again also in 2019 as an Amazon exclusive.

There is a Kohls-exclusive[1] value pack which comes with a Flip Clip and twenty-four Elite Darts. It does not come with a Dual-Rail Barrel, Drop Grip, or a banana clip. 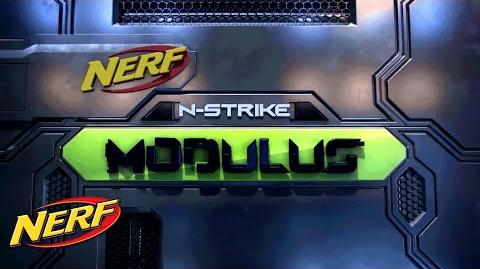