The Mission App Tactical Rail Mount is the name of two different Nerf accessories that were released in 2013 under the N-Strike Elite series.

Both versions of the mount are designed to hold a smartphone and allow the user to use a Nerf app while attached to a blaster's tactical rail. Smartphones are placed into the mount horizontally; a hole is included in the mount's backside for use with the device's camera. Simply put, this is where the similarities between the two versions end.

The original blue model is designed to hold an iOS smartphone; Android and Windows phones are not compatible with the mount due to the location and size of the holes for the camera.[1][2]

The slightly larger white version of the mount is completely redesigned and can now also hold HTC, Motorola, and Samsung smartphones (and possibly others too), due to a much larger hole. Contrary to the prototype depicted in official product photos, however, the mount only has a hole on one side, therefore it is not possible to choose freely whether to insert the phone with the camera on the left or on the right side.[3][4]

Despite these glaring differences (in fact, only the actual tactical rail mount, which is a separate piece that attaches to the main mobile device holder, is the same sculpt between both versions; everything else is redesigned from scratch, even the orange piece that locks the device holder uses a different mechanism), both versions are officially sold under the same Hasbro product code number (A4472).

The original blue model was first revealed on Chinese website Baidu in the form of a series of leaked photos[5] and released a some point during the summer of 2013.

In September of 2013, the second version, now in white and blue, was discovered.[6]

The Mission App Tactical Rail Mount has been released in the following variants: 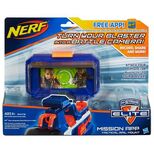 The white version of the Mission App Tactical Rail Mount.
Add a photo to this gallery

Retrieved from "https://nerf.fandom.com/wiki/Mission_App_Tactical_Rail_Mount?oldid=186032"
Community content is available under CC-BY-SA unless otherwise noted.