The Microburst is a Nerf Super Soaker that was released in 2012 under the 2011 series.

The Microburst is a very small soaker. It features a loop on the back of the soaker, allowing users to attach something like a metal carabiner to it in order to carry it on a belt or bag. Unlike other soakers, it does not feature a tactical rail, most likely due to its size. It resembles a small Scatter Blast.

It advertises a firing range of up to twenty-nine feet (eight meters).

The Microburst was re-released in 2014 under the Nerf Super Soaker series. It was succeeded in 2015 by the Microburst 2.

The Microburst has been released with the following color schemes:

The packaging for the Microburst. 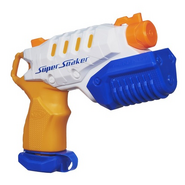 The white, orange and blue Microburst. 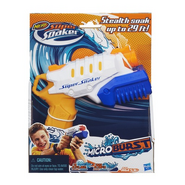 The packaging for the white, blue, and orange Microburst.
Add a photo to this gallery

Retrieved from "https://nerf.fandom.com/wiki/Microburst?oldid=185631"
Community content is available under CC-BY-SA unless otherwise noted.