Not to be confused with Nerf Micro Darts.

Micro Dart (commonly called a Suction Dart or Foam Dart) is the unofficial name for a type of Buzz Bee dart.

The Micro Dart is a rather small dart and is used in many Buzz Bee blasters. The dart earns its nickname due to its similarities in size with a Nerf Micro Dart, although the two are slightly different in length and construction. A basic Micro Dart features a suction cup head that will stick to most smooth surfaces, even when fired at long range.

The Micro Dart served as the basis for other dart types, such as the Extreme Dart and the Sticky Dart.

They were first introduced in 2003. The original variant differed from today's version of the dart. The older version of the dart, which was used up until the release of the 2008 Air Blasters line, featured a plastic ring and dense foam under the dart head. It is unknown what this ring of plastic did to the dart's performance or why it was removed. The dense foam under the dart head of the original was made to prevent the dart head from coming apart from the main foam body, unlike a Nerf Micro Dart.[1]

The Micro Dart has also been used in some Air Zone blasters under a gray and blue color scheme.

In 2014, a unique variation of the Micro Dart appeared, titled the Splash Dart, which could fill with water to soak an enemy if struck with the dart.

In 2014, photos began appearing of regular Micro Darts with no suction cup on their tips. These were first spotted on the German online website Bankcroft.de. The flat-tipped variation is said to offer an increase in performance and bears a strong resemblance to the X-Shot Excel Dart.

It is unknown if this variation of dart had an international release.

The Micro Dart has been released with the following color schemes:

Micro Darts refill packs can be purchased in the following sizes: 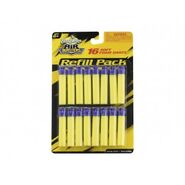 The old packaging for the sixteen dart refill pack. 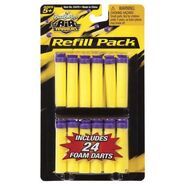 The old packaging for the twenty-four dart refill pack. 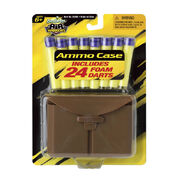 The old packaging for the fifty-one dart refill pack.
Add a photo to this gallery

Retrieved from "https://nerf.fandom.com/wiki/Micro_Dart_(Buzz_Bee)?oldid=185622"
Community content is available under CC-BY-SA unless otherwise noted.