Not to be confused with the Tech Target Eliminator.

The Micro Blaster is a Nerf blaster that was released in 2008 under the Dart Tag series.

It comes exclusively in blaster sets and cannot be purchased separately.

The Micro Blaster is a single-fire pocket blaster that can hold up to two darts at a time. It is primed back similar to the N-Strike Reflex IX-1. On the bottom of the blaster, there is a plastic piece that the user can pull down to provide space for an extra dart. The blaster features no tactical rail, due it its size.

The Micro Blaster was first released in the Elimination Game blaster set outside the Dart Tag series with no name. Its re-release with the Hyperfire Deluxe 2-Player Set gave it the name Micro Blaster. Further re-releases renamed it to Eliminator.

The Micro Blaster can be purchased with the following color schemes:

The Micro Blaster was packaged with the Elimination Game, Hyperfire Deluxe 2-Player Set, and the Targeting Set. 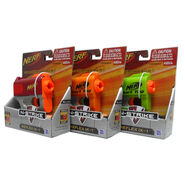 A packaged Reflex, along with two incorrectly packaged Micro Blasters.
Community content is available under CC-BY-SA unless otherwise noted.