The Messenger is a Nerf blaster that was released in fall of 2014[1] under the Secrets & Spies sub-series.

It comes packaged with a message decoder, an invisible ink marker, and five Message Darts.[1]

The Messenger is a small direct plunger blaster. It features a small tactical rail with no gaps on it. It has a similar muzzle to that of the N-Strike Elite Triad EX-3. It also features the use of smart air restrictors that, like the Triad, the Crossfire Bow and the Rough Cut 2x4, fire off darts no matter which barrel they are loaded into. This makes air restrictor removals extremely difficult to achieve with positive results. The barrels have translucent plastic allowing players to see through the plastic to see the messages written on inserted Message Darts. The handle is not solid plastic and has many small holes in it. As well, in the bottom of the handle an included pen can be inserted. This pen is for writing messages on the Message Darts to be sent to other players.

The first prototype mock-up design of the Messenger does not feature the aiming reticle seen on the final production blaster. An early stock image of the Messenger features black plastic in place of the translucent red plastic on the barrels. The handle's logo was also not painted on this variant and the main logo was centered and not on a slant. Some early models are also considerably lighter in color than final production blasters.

The Messenger was discovered alongside the Spylight and Diamondista on the Brazilian toy website HobbyBrinquedos in late January of 2014.[4] The name was not completely known at the time due to the fact that the site was using prototype names, hence why the Spylight was named the "Night Raid". Because of this, the Messenger was sometimes referred to as the Message Blaster or the Message Launcher during this time.[5] At the time Hasbro would not comment on the three blasters, instead telling fans to wait for the 2014 Toy Fair.

The Messenger features smart air restrictors, thus removal of the air restrictors is impractical. Despite this, the Messenger is a superb choice for entry-level modders due to its simple and straightforward internals. Some mods can be completed on the blaster such as barrel replacements, spring replacements, and seal upgrades.[7] Some owners may also want to wrap the handle; a common criticism of the blaster is that the handle is rather uncomfortable. 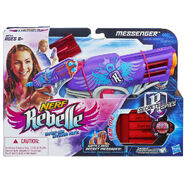 The packaging for the Messenger. 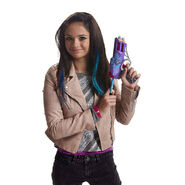 A Nerf model priming the Messenger. 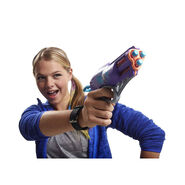 A Nerf model aiming the Messenger.

The Messenger's internals.
Add a photo to this gallery

Retrieved from "https://nerf.fandom.com/wiki/Messenger?oldid=185620"
Community content is available under CC-BY-SA unless otherwise noted.