The Megalodon is a Nerf blaster that was released in the fall of 2019 under the N-Strike Mega series.

It comes packaged with twenty Mega Darts and instructions.

The Megalodon is a slide-action blaster with a twenty dart drum. Unlike the similar Mega Mastodon, however, it is not battery-operated. Instead, its carry handle doubles as its priming mechanism. The blaster can be slam fired. Additionally, it has three strap points on the front, back and handle of the blaster.

The drum comes detached from the blaster in box, for packaging purposes. Once attached, it can be removed by inserting an object like a screwdriver into a small hole in front of it.

The Megalodon was originally leaked online in winter of 2018. It was later shown off at the 2019 Toy Fair. 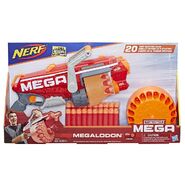 The packaging for the Megalodon. 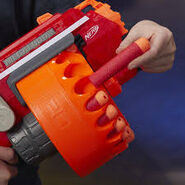 The Megalodon being reloaded.

A promotional image for the Megalodon with a grey trigger. 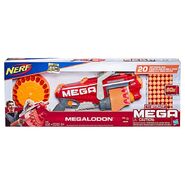 The packaging for the Megalodon Value Pack. 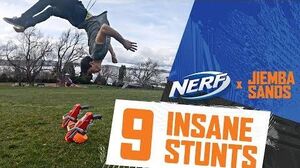