The Mega Mastodon, also known as the Mastodon, is a Nerf blaster that was released in fall of 2016 under the N-Strike Mega series. It requires six "D" batteries to be operated.

It comes packaged with twenty-four Mega Darts, a shoulder strap, and instructions.

The Mega Mastodon is an automatic[2][1] flywheel[1] blaster. It has a large, integrated dart drum that can hold up to twenty-four darts at a time. It features the use of a carry handle; it has three tactical rails: two long ones on top of the blaster and a short one below, in front of the cylinder. There are two strap points, one in front of the top tactical rail and one at the end of the blaster, which the packaged shoulder strap can be clipped onto.

The Mastodon was officially announced in January of 2016, prior to the Toy Fair of the same year.

The Mega Mastodon was released in a Costco exclusive value pack that included the blaster itself, seventy-two Mega Darts, a shoulder strap, and instructions. 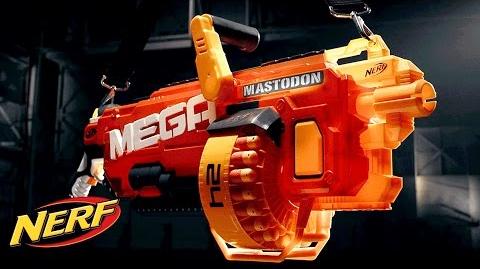 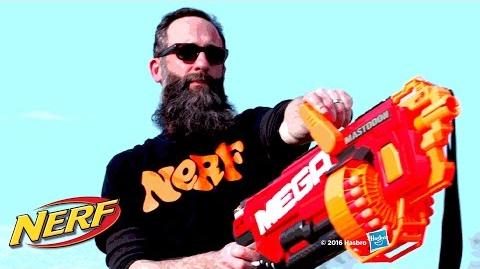 NERF - 'Mega Mastodon' Behind the Blaster