The Mega Dart Barrel Extension is a Nerf blaster and barrel extension that was released in fall of 2016 under the N-Strike Modulus series.

It comes packaged with the Tri-Strike.

The Mega Dart Barrel Extension is a small HAMP blaster that doubles as a barrel extension. While the name may suggest that the barrel extension itself works on Mega Dart blasters, it cannot be equipped to any, nor is the diameter of the barrel large enough to accommodate a Mega Dart's size (despite the barrel's outer appearance). The Mega Dart portion instead refers to the underbarrel blaster, which fires Mega Darts.

It features the use of an intelligent air restrictor system, which allows for a single dart to be fired from any of the four lower barrels when it is not fully loaded. 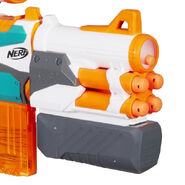 The barrel extension equipped on a Tri-Strike. Strangely, there is a loose Elite Dart sitting in the barrel.
Add a photo to this gallery
Retrieved from "https://nerf.fandom.com/wiki/Mega_Dart_Barrel_Extension?oldid=185587"
Community content is available under CC-BY-SA unless otherwise noted.