Not to be confused with the newer Mega Dart.

A Mega Dart, also known as a Sucker Dart, is a type of Nerf dart that was released in 1993.

Mega Darts are longer and slightly bigger in diameter than a typical Micro Dart.

There were two different types of Mega Darts; these had a similar appearance, making them hard to identify between.

The original version of the dart, referred to as "Type 1", had a longer range, but was less durable. When blasters started to use compression rings, Nerf switched to a different model that looked similar. While this version, dubbed "Type 2", was similar in appearance, its range was much more mediocre in comparison.

First introduced in 1993, the Mega Dart was one of the first types of Nerf darts. It was modeled after the Sharpshooter Dart released a year prior. A majority of blasters in the 1990s and early 2000s featured use of Mega Darts.

A modern Mega Dart was released in 2013 with the N-Strike Mega Centurion.

The Mega Dart has been released with the following color schemes:

Mega Dart refill packs can be purchased in the following sizes: 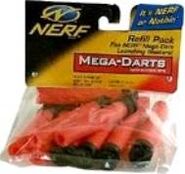 The packaging for a Mega Dart refill pack.