The Max Attack is an X-Shot blaster that was released in 2018.

The 2018 Max Attack is an updated version of the original 2017 Max Attack, with updated performance and a new color scheme.

It is a clip-fed blaster; a clip release button is located on either side of the blaster, just behind the clip well.

The Max Attack is not compatible with Nerf clip system clips, due to size of its ten dart clip.

Elite Darts, Streamline Darts, and Adventure Force darts (such as Long Distance Darts) will all get stuck and fail to feed properly, due to their length.

A value pack of the Max Attack includes three clips and ninety-six darts.

The packaging for the Max Attack. 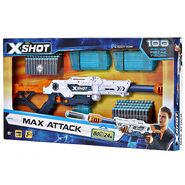 The packaging for the Max Attack value pack.
Community content is available under CC-BY-SA unless otherwise noted.