For information on the blaster's standard features, see Maverick REV-6.

It is a GameStop exclusive.

The Clear Maverick has been found to shoot significantly weaker than its original counterpart, making it much less useful in competitive play.

The GameStop exclusive of the Clear Maverick was a bonus for pre-ordering Nerf N-Strike. 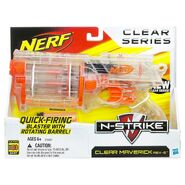 The Clear Maverick's 2010 packaging.
Add a photo to this gallery

Retrieved from "https://nerf.fandom.com/wiki/Maverick_REV-6_(Clear)?oldid=185415"
Community content is available under CC-BY-SA unless otherwise noted.