Not to be confused with the 2007 Dart Tag Magstrike.

The Magstrike AS-10 is an air system Nerf blaster that was released in 2007 under the N-Strike series.

It comes packaged with one Magstrike clip, ten Whistler Darts, and instructions.

It is a Target exclusive, and is also found in Kmart stores in Australia.

The Magstrike AS-10, like its predecessor, is an air-powered fully-automatic blaster. It has a single tactical rail on top of it.

The blaster may have breaking problems, but if treated well, it will not break. Like most blasters at the time, the Magstrike is not suggested for younger people, as it requires a bit of arm strength to use properly.

The Magstrike was originally released as a Dart Tag series blaster in 2007.

The Magstrike was re-released in 2019 under the ICON Series, to celebrate the fiftieth anniversary of the Nerf brand. The new clip that it comes with is not compatible with the original blaster.

To reload the Magstrike, load up to ten darts into a provided clip. Load it into the blaster. Pump the blaster twenty to thirty times for maximum range.

Pull the trigger to unleash the darts. 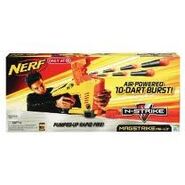 The Magstrike AS-10's updated packaging.
Add a photo to this gallery

Retrieved from "https://nerf.fandom.com/wiki/Magstrike_AS-10?oldid=185350"
Community content is available under CC-BY-SA unless otherwise noted.