The MK3 is a re-release of the Tek 3 with updated internals, to boost its firing range. It is small revolver-style blaster with a single-fire priming rod. Its turret must be manually advanced.

It advertises a firing range of eighty feet (twenty-four meters).

The MK 3 is the third iteration of the 2016 Barrel Breaker TK-3. Some releases of it still use the name Tek 3. 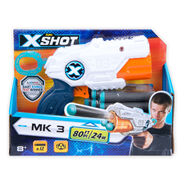 The packaging for the MK 3. 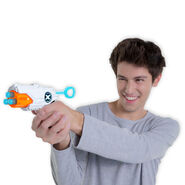 A model aiming the MK 3. 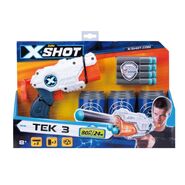 The packaging for the Tek 3.
Add a photo to this gallery

Retrieved from "https://nerf.fandom.com/wiki/MK_3?oldid=188619"
Community content is available under CC-BY-SA unless otherwise noted.