For the X-Shot blaster of a similar name, see MK 3.

The MK-3 is a Dart Zone blaster that was released on October 1st, 2021, under the Dart Zone Pro series. It requires eight "AA" batteries in order to be operated.

The MK-3 is a select-fire flywheel clip-fed dart blaster similar to the Nerf N-Strike Modulus Regulator. It features a fire mode selector on the right side of the blaster, which switches between automatic and semi-automatic firing modes. It features a buffer tube for its included detachable shoulder stock.

There are two tactical rails - one on top of the blaster and one below the muzzle.

The blaster is compatible with Nexus Pro, Aeon Pro, Conquest Pro and Stryker magazines, as well as with Nerf clip system clips and darts. It is, however, not cross-compatible with magazines included with the MK-1 and MK-1.1. 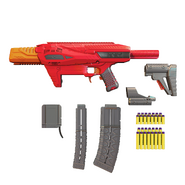 The MK-3 and its included accessories. 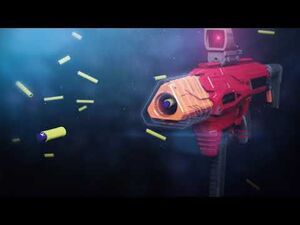 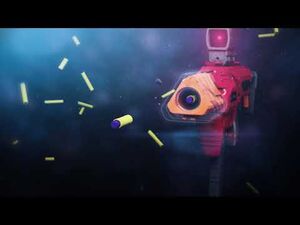