For information on the blaster's standard features, see Longshot CS-6.

The Longshot CS-6 is a clip system Nerf blaster that was released in 2020 under the ICON Series.

It comes packaged with a front blaster, a six dart clip, a scope, twelve Elite Darts, and instructions.

The Longshot is a re-release of the N-Strike blaster with the same name.

It was first found on the back of the Spectre REV-5's packaging in June of 2020. It was later found on shelves on Hong Kong Toys "R" Us stores in July.

The plunger tube of the main blaster is much smaller than the original's, severely reducing modification potential.[1] 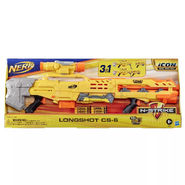 The packaging for the ICON Series Longshot. 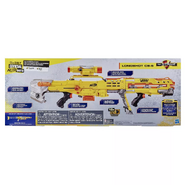 The back of the packaging for the ICON Series Longshot.

The ICON Series Longshot, as it appears on the back of the Spectre REV-5's packaging.