The Longarm is a Nerf blaster that was released in fall of 2016 under the Impact Zone sub-series.

The Longarm is a revolver-type blaster with a capacity of five darts in its cylinder. It has one tactical rail and one strap point built into the blaster's handle.

The Longarm was first announced at the 2016 Toy Fair, alongside the Desolator. 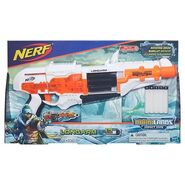 The packaging for the Longarm. 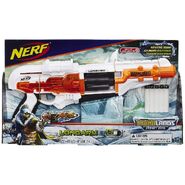 The packaging for the grey trigger variant of the Longarm.

A 3D render of the Longarm.