The Long Range Upgrade Kit is a Nerf product set that was released in fall of 2015 under the N-Strike Modulus series.

It comes packaged with a Distance Scope, a Long Range Barrel, and a Folding Bi-Pod.

The Long Range Upgrade Kit was revealed after a United Kingdom supplier accidentally released the names of the Modulus kits in January of 2015. It was officially announced at the 2015 Toy Fair.

This product set, along with the Stealth Ops Upgrade Kit, had a running change in production, prior to the release of the IonFire and the Recon MKII, where patches of green paint found on earlier production models were removed as a cost-cutting measure, and as a reaction to some Nerfers disliking the green paint that would be intended for use with certain blasters resembling the Modulus paint scheme, such as the Whiteout Series blasters. 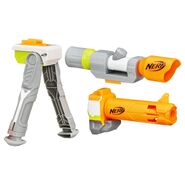 The contents of the Long Range Upgrade Kit. 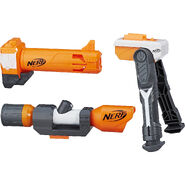 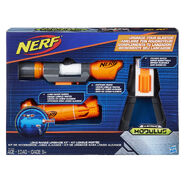 The updated packaging for the Long Range Upgrade Kit.
Add a photo to this gallery

Retrieved from "https://nerf.fandom.com/wiki/Long_Range_Upgrade_Kit?oldid=185259"
Community content is available under CC-BY-SA unless otherwise noted.