Not to be confused with the Air Warriors Long Distance Dart or the Nerf Suction Dart.

A Long Distance Dart is a type of Buzz Bee dart that was released in 2015 under the Ultra-Tek sub-series.

The Long Distance Dart is the current type of dart for Ultra-Tek blasters. They have a suction cup head and are compatible with Buzz Bee and Nerf clips due to the head's diameter being smaller.

The darts are very similar in appearance to the N-Strike Elite Suction Dart, and are most likely designed to be a cheap competitor.

They were also re-released under the Adventure Force brand as the Suction Dart as well, with blue and gray color schemes.

Outside of the Ultra-Tek line, the Long Distance Dart has been re-released in other colors to match the theme of the line. This includes:

The Long Distance Dart has been released in the following color schemes: 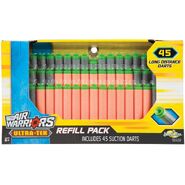 Alternate packaging for the forty-five dart refill pack.
Add a photo to this gallery
Retrieved from "https://nerf.fandom.com/wiki/Long_Distance_Dart?oldid=205755"
Community content is available under CC-BY-SA unless otherwise noted.