Not to be confused with the Longshot CS-6 or the N-Strike Modulus blaster of a similar name.

The LongStrike CS-6 is a clip system blaster that was released in 2010 in the N-Strike series.

The LongStrike CS-6 is a bolt-action clip-fed blaster. It features a shoulder stock which must be attached to the blaster upon use; this is not meant to be removed after its initial attachment. Two extra clips can be stored in this stuck.

It has four tactical rails: two in tandem on top of the blaster, then one above and underneath the included barrel extension accessory. A jam door is located in-between the two top rails, providing an access point for clearing dart jams.

The LongStrike reportedly has lower ranges than other N-Strike blasters, due to it having reverse plunger internals. Range can be affected, depending on if an older version of the barrel extension is attached on. Firing range and accuracy can be somewhat increased by loading individual darts into the barrel, through the jam door or clip well, rather than using the clip system, but this method is rather unwieldy in Nerf wars.[citation needed]

Another problem with this blaster is that there is a small delay between each shot. The blaster locks for about a half second after each time the user fires it, which may make it harder to prime it again.

The LongStrike first appeared as a weapon in the video game Nerf N-Strike Elite a year before its release.

It was re-released twice in 2011, for the Sonic Series and Whiteout Series.

It was spiritually succeeded by the 2013 N-Strike Mega Centurion, and again in 2017 by the AccuStrike Series RaptorStrike.

The LongStrike has been released with the following color schemes:

The blaster's clip and jam door locks can be removed for ease of access. 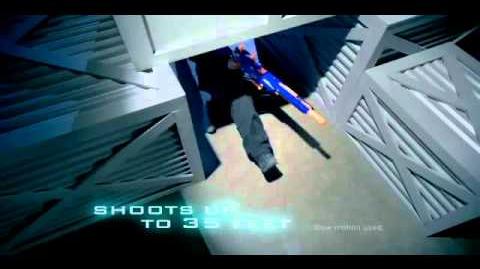