Not to be confused with the N-Strike LongStrike CS-6.

The LongStrike is a Nerf blaster that was released in fall of 2018[1] under the N-Strike Modulus series.

The LongStrike is a bolt-action clip system blaster. Unlike its predecessor, it uses a direct plunger system instead of a reverse plunger. The blaster also has an unjamming button on the left side, which was a feature not present on the original blaster. Additionally, the LongStrike's bolt handle is removable.

The LongStrike is a re-release of the 2010 N-Strike LongStrike CS-6 with updates to the internals to match blaster performance with other modern N-Strike Elite firing ranges.[2]

Images of the LongStrike were first leaked on September 24; the blaster was officially announced by Hasbro on October 4. 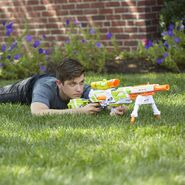 A Nerf model aiming the LongStrike.

A Nerf model aiming the LongStrike. The scope is on backwards. 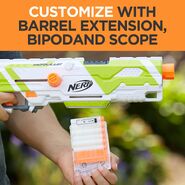 The LongStrike's clip being loaded. In reality, without the bolt to the rear, the clip would be extremely difficult to insert. 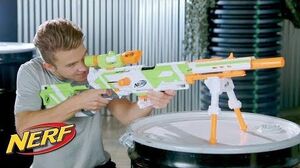