The Lock 'n Load is a Nerf blaster that was released in 1998 under the Hyper Sight series.

It comes packaged with three Mega Darts, a target, and a detachable dart holder.

The Lock 'n Load was re-released in late 1998 with an updated packaging scheme.

The Lock 'n Load became highly sought after in the NIC due to its strength, design, modification capabilities, and comfortableness. 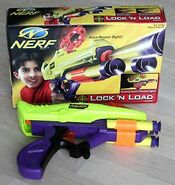 A banner depicting the updated Lock 'n Load packaging.
Add a photo to this gallery

Retrieved from "https://nerf.fandom.com/wiki/Lock_%27n_Load?oldid=185253"
Community content is available under CC-BY-SA unless otherwise noted.