The Lightning Bow is a Nerf blaster that was released in spring of 2016 under the N-Strike Elite Mega sub-series.

As the name suggests, the Lightning Bow is a bow-action blaster. It is advertised as having Mega XD internals. It features two dart holders that go on either side of the top bow arm; these come packaged separately and need to be attached to the blaster. 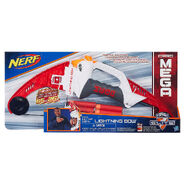 The packaging for the Lightning Bow. 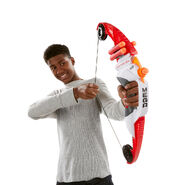