The Light Command is a battery-operated, belt-fed flywheel blaster with internal LED lights that activate when the firing trigger is pulled. The power switch is located on the left side of the blaster. The blaster features three power modes: an off mode, a mode which only powers the internal lights, and a fully-on mode which powers both the lights and the flywheels. Unlike the Powerbolt Belt Blaster, the Light Command does not feature a breech lid, and is instead loaded by simply inserting one end of the belt through the feeding area. It also features an accessory rail on top of the blaster, which is compatible with Nerf tactical rail accessories.[2]

The Light Command is compatible with Nerf Elite Darts and its many variants.

It advertises a firing range of up to eighty feet (twenty-four meters) and a rate of fire of one dart per second. 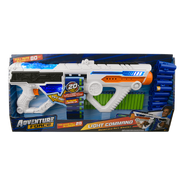 The packaging for the Light Command. 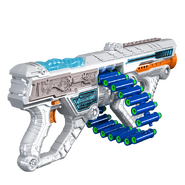 The Light Command with its loaded twenty dart belt. 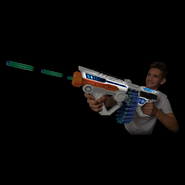 A model firing the Light Command.
Add a photo to this gallery

Retrieved from "https://nerf.fandom.com/wiki/Light_Command?oldid=185236"
Community content is available under CC-BY-SA unless otherwise noted.