The Lawbringer is a Nerf blaster that was released on August 1, 2015 under the Doomlands 2169 series.

It comes packaged with twelve Doomlands Darts and instructions.

The Lawbringer is a large revolver-like blaster that is primed via hammer, like the Zombie Strike Hammershot and the Rebelle Sweet Revenge. It can hold up to twelve darts in its cylinder. It has two tactical rails, both in tandem on the top of the blaster. Its integrated stock can hold up to twelve darts. Like other Doomlands blasters, it has clear plastic parts, which shows the firing mechanisms of the blaster. Its muzzle is wider than normal, reducing the chance of unnecessary friction with the exiting dart.

The packaging for the Lawbringer. 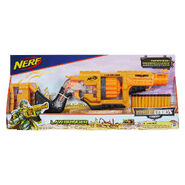 The updated packaging for the Lawbringer.
Add a photo to this gallery

Retrieved from "https://nerf.fandom.com/wiki/Lawbringer?oldid=206743"
Community content is available under CC-BY-SA unless otherwise noted.