For the app of the same name, see Laser Ops Pro (app).

Laser Ops or Laser Ops Pro is a series of Nerf laser tag blasters that was released in fall of 2018.

Laser Ops is the successor to the previous Nerf series, Lazer Tag. Unlike its predecessor, Laser Ops re-introduces hosted games previously on Lazer Tag Team Ops through Bluetooth by means of an app downloaded and ran on mobile devices, similarly to previous Hasbro Lazer Tag products (not released under the Nerf brand). The system is not backwards compatible with previous Nerf taggers, such as the Phoenix LTX tagger.

Laser Ops Classic features blasters with a more traditional, cartoonish sci-fi look to them and a bright yellow color scheme, akin to older laser tag toys and less to the modern, tactical appearance of Laser Ops.

An alternate variant of the Laser Ops Pro logo.
Add a photo to this gallery 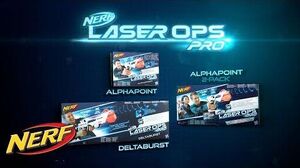 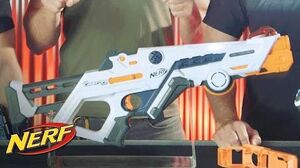