The Komet Hunter is a Nerf Koosh ball blaster that was released in 2013 under the Koosh Galaxy series.

It comes packaged with one purple Koosh Galaxy Ball.

The Komet Hunter is a green ball blaster. It is entirely spring operated, and once the blaster is pulled back far enough, it automatically de-catches and fires the ball. The blaster itself uses a simple mechanism previously seen in the Galactagon and the Star Scout, even using the same exact priming handle as the Galactagon.

This blaster is packaged in a similar fashion to the Atom Blaster, the Secret Strike AS-1 and the Jolt EX-1; it is packaged under a layer of plastic glued onto a sheet of cardboard. This is the only blaster in the Koosh Galaxy line to come packaged like this.

It was one of the final blasters released under the Koosh Galaxy line, alongside the Galactagon. The blasters likely had short or cut-off production runs due to the parent series being discontinued in the same year, making them both rare blasters to find in the wild. 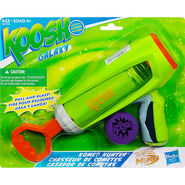 The packaging for the Komet Hunter.
Community content is available under CC-BY-SA unless otherwise noted.
Advertisement