The Khaos MXVI-4000 is a Nerf blaster that was released in fall of 2016 under the RIVAL series. It requires six "D" batteries or the Rechargeable Battery Pack back to be operated.

It comes packaged with a forty round magazine, forty High-Impact Rounds, and instructions.[1]

The Khaos MXVI-4000 is a fully automatic blaster. It features two tactical rails - a long rail on top of the blaster and a smaller one below the muzzle. On either end of the top rail are integrated, flip-up sights. The end of the blaster can act as a shoulder stock.

Similarly to the N-Strike Elite HyperFire, the Khaos MXVI-4000 uses a conveyor system that advances the rounds into its flywheels.

The Khaos has been released with the following color schemes: 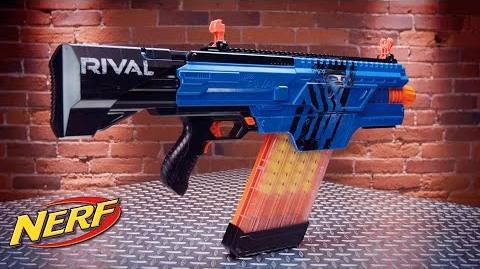