The Justice is an X-Shot blaster that was released in 2019 under the X-Shot Ninja series.

The Justice is a re-release of the Regenerator with a blue and yellow, "Ninja" color scheme. It, similarly, is advertised as having over a thousand possible combinations of accessories on the blaster.

The blaster itself features an integrated carry handle and three accessory rails: one on the carry handle, and one on either side of the blaster's shell. The dart holders can be attached to provide additional storage behind the clip well.

Its clip feeds through horizontally and can be advanced manually without priming the blaster.

It is advertised to have a firing range of up to ninety feet (twenty-seven meters).

A flat image of the Justice. 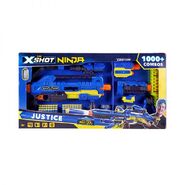 The packaging for the Justice.

The back of Justice's packaging. 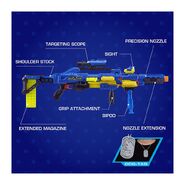 An image of the Justice with its attachments listed.