The Infinus is a Nerf blaster that was released in fall of 2018[1] under the N-Strike Elite series.

It comes packaged with a thirty dart drum, thirty Elite Darts, and instructions.

The Infinus is a clip system blaster similar to the RapidStrike CS-18 in design. It features Speed-load Technology which is exclusive to the Infinus. There is a chute on the top of the blaster above the grip which will accept darts and mechanically feed them into the inserted clip/drum. It also has an electronic status indicator, with lights that indicate whether the blaster is ready to fire, ready to be reloaded, full, or if it has jammed.[1]

The Infinus features an integrated stock in the back that houses the batteries, two tactical rails, and four strap points. Its clip release button is located just in front of its acceleration trigger. It also has a barrel extension attachment point on the front.

When a dart is inserted, a conveyor at the top forces the dart in, once it is in, it is brought to a chamber in which a mechanism pushes down on it, causing the dart to be loaded into the clip of the blaster.

The Infinus was originally leaked in the summer of 2017, along with other blasters. Its name was originally unknown, until a distributor website unintentionally revealed its name.[2] Official information was announced in January 23, 2018[1], confirming a new drum magazine, a price point, and key/unique features of the blaster. It was later shown off at the 2018 New York Toy Fair.

In Australia, it was initially exclusive to Big W. 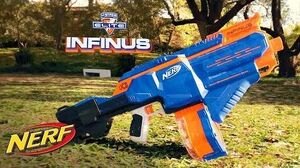