The Incisor is a Nerf blaster that was released in fall of 2016 under the Alien Menace series. It requires four "AA" batteries to be operated.

It comes packaged with twenty Alien Menace Darts and instructions.

The Incisor is a motorized flywheel Nerf blaster with an internal drum with a twenty dart capacity. It has three strap points: one above the blaster's muzzle, one built into the handle, and one built into the integrated shoulder stock.

The blaster's jam door is built into the front grip. Pushing a lever on the back of the front grip will cause it to swing outwards, opening the jam door. The jam door can also double as a feeding port for darts, although it might be more practical to load darts from the open sections of the drum. Unusually, the jam door is below instead on the sides or on top, due to the feeding mechanism and barrel being at the bottom as well, where jams would occur.

The Incisor was announced at the 2016 New York Toy Fair, along with the Ravager.

In an unknown year, the Incisor was re-released with a blue color scheme and released with darts and packaging similar to that of the Voidcaster.[1][2] This variant is extremely rare, but also was no longer a Toys "R" Us exclusive, showing up in other retailers such as Marshalls and TJ Maxx, most likely due to Toys "R" Us going out of business.[citation needed]

The Incisor has been released with the following color schemes: 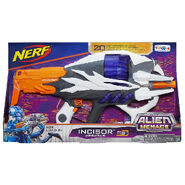 The packaging for the Incisor.

A pre-release render of the Incisor.

The packaging for the blue Incisor.

The back of the blue Incisor's packaging.
Add a photo to this gallery

Retrieved from "https://nerf.fandom.com/wiki/Incisor?oldid=197541"
Community content is available under CC-BY-SA unless otherwise noted.