The Imperial AT-ACT is a Nerf blaster that was released in 2016 to promote the film Rogue One: A Star Wars Story. It requires four "D" batteries to be operated.

The Imperial AT-ACT is a Star Wars playset which features a built-in Nerf blaster. As its name suggests, it is based on All Terrain Armored Cargo Transport vehicle from the film. It comes with legs disassembled for storage and has to be put together. It features a removeable cargo container in the middle and the power switch is located inside the cargo hold.

The cockpit has a room for a single action figure and a dart hopper which carries four darts at a time. The launcher's muzzle remains hidden until a button command is pressed.

On the back of the set there is a set of buttons which activates various features, such as walking and firing darts. It can also be remotely controlled via smartphone app.

To reload the Imperial AT-ACT, load four darts into a hopper inside the cockpit.

Press the button on the back of the back of a walker (or on the app when controlled remotely), which will automatically wind up the flywheels and fire a dart.

The packaging for the Imperial AT-ACT. 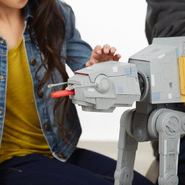 An Imperial AT-ACT firing a dart.
Community content is available under CC-BY-SA unless otherwise noted.