The Impact X, also known as the Quickfire Eaglet Impact X, is an Air Zone blaster that was released in 2013.

It comes packaged with a clip, four shells, and four Xtreme Darts.

The Impact X is a shell-loaded, clip-fed blaster similar to the Buzz Bee Hawk - as the user fires darts, the shells auto-eject out the right side of the blaster. It has an integrated shoulder stock and an iron sight above the muzzle.

The Impact X was re-released with a new color scheme; it was carried over when Air Zone rebranded into Stats Blast. It also also re-released as a Dart Zone blaster as the QF-Eagle with updated internals.

The Impact X has been released with the following color schemes: 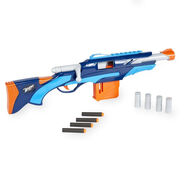 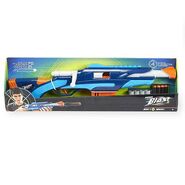 The packaging for the blue Stats Blast Impact X.
Community content is available under CC-BY-SA unless otherwise noted.
Advertisement