The Hypnos XIX-1200 is a Nerf blaster that was released in January 2019 under the RIVAL series.

The Hypnos is a magazine-fed pump-action blaster. Magazines are fed on the top of the blaster. Like other RIVAL blasters, it features a safety feature, as well as an unjamming lever located just above the trigger well. A spare magazine can be stored on the side of the blaster via the included clips. The stock can be folded to the side, much like the N-Strike Elite Spectre REV-5's stock. A tactical rail sits atop the blaster, above the muzzle.

The Hypnos was released with the following color schemes: 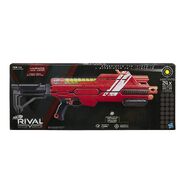 The packaging for the Team Red Hypnos XIX-1200. 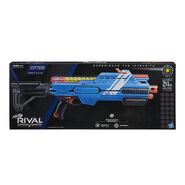 The packaging for the Team Blue Hypnos XIX-1200. 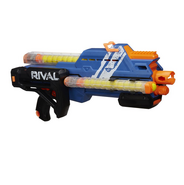 The Team Blue Hypnos XIX-1200 with its stock folded.
Add a photo to this gallery

Retrieved from "https://nerf.fandom.com/wiki/Hypnos_XIX-1200?oldid=197159"
Community content is available under CC-BY-SA unless otherwise noted.