The Hyperspin is an Adventure Force blaster that was released in 2019.

The Hyperspin is a revolver-style blaster with two cylinders that can be switched between, by pulling on a lever under the firing trigger, similar to the Nerf Doominator and FlipFury. Each cylinder holds six darts.

The Hyperspin is a re-release of the X-Shot Xcess.

The Hyperspin has been released with the following color schemes: 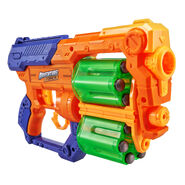 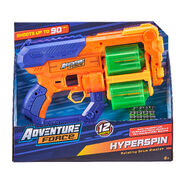 The packaging for the red Hyperspin.

A model aiming the Hyperspin.
Community content is available under CC-BY-SA unless otherwise noted.
Advertisement