Not to be confused with the 2016 N-Strike Elite blaster of a similar name.

The Hyperfire is a Nerf blaster that was released in 2004 under the Street Zone series.

It comes packaged with a set of matching Vision Gear and ten Tagger Micro Darts.

The Hyperfire is a top-prime, single-fire blaster with a ten dart turret. It features a single short tactical rail on top of it, and an iron sight in front of that.

The Hyperfire was the first Dart Tag blaster to be released, and was initially referred to as the Dart Tag Blaster. Its later re-release into the Dart Tag series proper renamed it to the Hyperfire.

For a period of time, it was the official Nerf Dart Tag League blaster. However, it was replaced by the Furyfire in 2009.

The Hyperfire has been released with the following color schemes:

The Hyperfire was also available for purchase with the Complete 2-Player System and the Hyperfire Deluxe 2-Player Set. It also has its own blaster set, which includes a Scoring Vest. 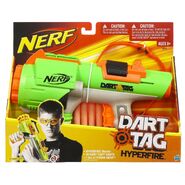 The packaging for the Hyperfire.