Nerf Wiki
Register
Don't have an account?
Sign In
Advertisement
in: Articles with unsourced statements, Products with limited stock, Hasbro blasters,
and 9 more

Not to be confused with the 2004 Dart Tag blaster of a similar name.

The HyperFire is a Nerf blaster that was released in fall of 2016 under the N-Strike Elite series. It requires four "D" batteries to be operated.

It comes packaged with a twenty-five dart drum, twenty-five Elite Darts, and instructions.

The HyperFire is a fully-automatic flywheel clip system blaster. It features an integrated shoulder stock and a grip located in front of the clip well. It has a single tactical rail above the front end of the blaster and has four strap points: two on the front end, and two on the back, built into the stock.

Unlike most flywheel blasters, it uses a conveyor system to feed darts into the flywheels, rather than a pusher mechanism. This conveyor system has a faster rate of fire than a pusher mechanism; despite this, it is known to jam on old, worn darts if there is not enough grip from the belt to drive the dart into the flywheels.[citation needed] It also has canted flywheels which induce a rifling effect on fired darts, increasing accuracy.[citation needed]

It advertises a firing range of up to ninety feet (twenty-seven meters), and a rate of fire of up to five darts per second.

The HyperFire was released in a Costco exclusive value pack that included the blaster, two twenty-five dart drums, fifty Elite Darts, and instructions. 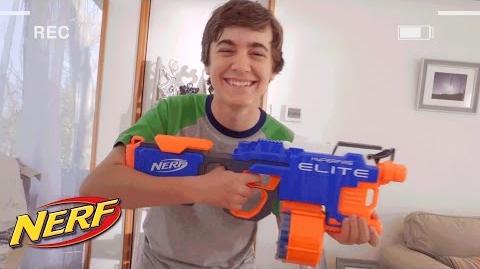 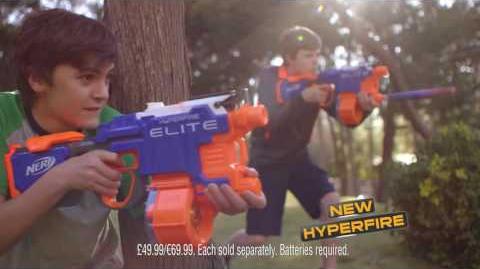 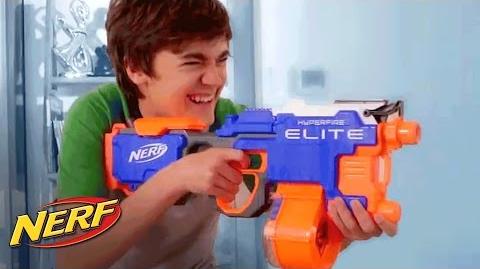 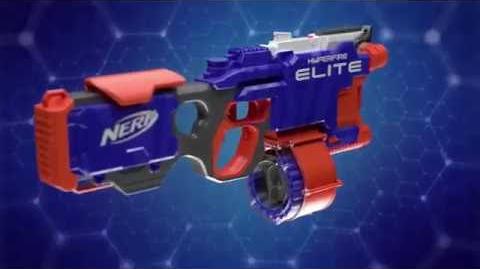 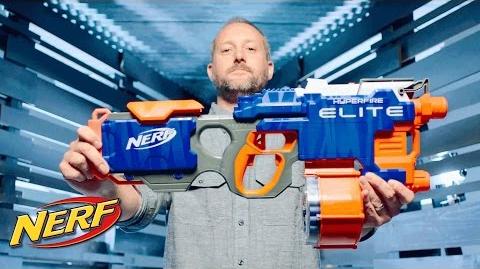 NERF - 'Elite Hyperfire' Behind the Blaster