The Hydrostorm is a Nerf Super Soaker that was released in 2014 under the Storm Series. It requires six "AA" batteries to be operated.

The Hydrostorm is a motorized soaker and was among the first of the 2014 Super Soakers to be discovered. It is the only soaker so far from the 2014 lineup to not only utilize a firing trigger, but be included within the Storm Series sub-series. Unlike other motorized Nerf soakers, the Hydrostorm is not compatible with water clips or drums.

The Hydrostorm has been released with the following color schemes: 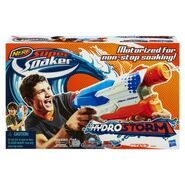 The European packaging for the Hydrostorm. 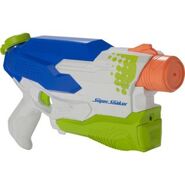 The blue version of the Hydrostorm.
Add a photo to this gallery

Retrieved from "https://nerf.fandom.com/wiki/Hydrostorm?oldid=185089"
Community content is available under CC-BY-SA unless otherwise noted.