The Hydro Cannon is a Nerf Super Soaker that was released in 2011 under the 2011 series.

It comes packaged with a Hydro Cannon shield.

The Hydro Cannon is a pump-action water soaker. It features a shield that can block incoming water and can help the user aim their shot.

There are three tactical rails on the Hydro Cannon. Two are diagonal and on either side of the top, which allows for ambidextrous use with the shield. The third is level and up at the muzzle. Its refill cap is located on the right side of the soaker near the integrated shoulder stock. It also has strap attachments under the nozzle and at the end of the handle.

The Hydro Cannon was the first Super Soaker to use elastic pressure since 2007's Hydro Blitz.

Despite all of the other 2011 soakers receiving re-packaging for the 2012 lineup, the Hydro Cannon was not. It was also not re-released under the Nerf Super Soaker series.

Two Hydro Cannons were included in the Hydro Cannon 2-Pack. Unlike other soaker dual packs, it does not feature the second Hydro Cannon in a "two-player" color scheme.

The Hydro Cannon's packaging.
Add a photo to this gallery 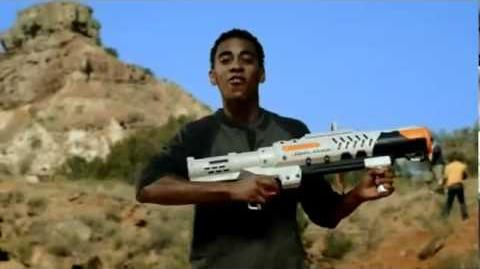 Retrieved from "https://nerf.fandom.com/wiki/Hydro_Cannon?oldid=185086"
Community content is available under CC-BY-SA unless otherwise noted.