The Hurricane is an X-Shot blaster that was released in 2015.

It comes packaged with a ten dart clip and depending on the package, either ten or twelve Excel Darts.

The Hurricane is a clip-fed blaster that is extremely similar to the Nerf Recon CS-6 and Retaliator, as the Hurricane also has a top prime.

On both sides is a clip release button. This can be pressed to remove the clip when the top is moved back.

The Hurricane is not compatible with Nerf clip system clips, due to its own clips being sized specifically for the shorter Excel darts. Elite Darts, Streamline Darts, and Adventure Force darts (such as Long Distance Darts) will all get stuck and fail to feed properly, due to their length.

Like other X-Shot blasters, the Hurricane was re-released with a white and blue color scheme to match the rest of the line.

The Hurricane was released in the following color schemes:

A Hurricane is included in the Max Attack & Hurricane blaster set.

The packaging for the Hurricane.

The Australlian packaging for the Hurricane, claiming a firing range of fifty-five feet. 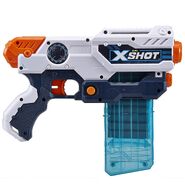 The blue and white variant of the Hurricane. 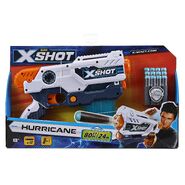 The packaging for the white and blue Hurricane.