The Holdout is a Nerf blaster that was released in fall of 2018 under the Doomlands 2169 series.

It comes packaged with a scope, two Doomlands Darts, and instructions.

The Holdout is a direct-prime-action, single-fire blaster. Like other Doomlands blasters, it features a clear panel on the side that shows off part of the blaster's internals. It has a single tactical rail on top.

The Holdout was officially announced at the 2018 Toy Fair. 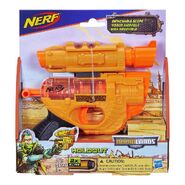 The packaging for the Holdout. 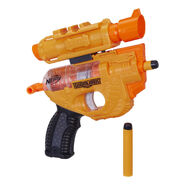 The grey trigger variant of the Holdout. 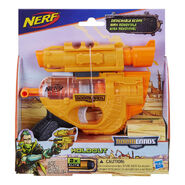 The packaging for the grey trigger Holdout. 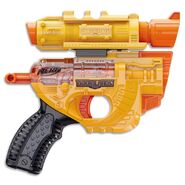 A 3D render of the Holdout.