The Hera MXVII-1200 is a Nerf blaster that was released in 2017 under the Phantom Corps sub-series. It requires six "C" batteries or a Rechargeable Battery Pack to be operated.

It comes packaged with a twelve round magazine, twelve High-Impact Rounds, and two RIVAL team banners.

It is a Target exclusive in the United States, but it has also been seen in Canadian Tire stores in Canada.

The Hera is a semi-automatic flywheel blaster that fires High-Impact Rounds through the use of magazines. The magazines can be loaded into the blaster via the pistol grip. It features a tactical rail on the top. The Hera also has a safety switch, which will stop the trigger from being pulled when switched on. The included banners are used to show which Team the user of the blaster is on, as Phantom Corps blasters do not have Team Red or Team Blue color schemes. It also has an integrated stock in the back.

The Hera is compatible with the seven round magazine.

The packaging for the Hera MXVII-1200. 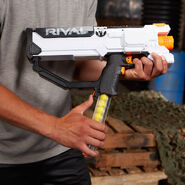 The Hera being loaded with its included magazine. A Nerf model holding the Hera. 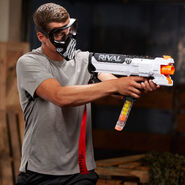 A Nerf model aiming the Hera.

Retrieved from "https://nerf.fandom.com/wiki/Hera_MXVII-1200?oldid=187666"
Community content is available under CC-BY-SA unless otherwise noted.