The Heavy SR is a Nerf blaster that was released in 2021 to promote the video game Fortnite.

It comes packaged with a scope, a six dart clip, six Fortnite Mega Darts, and instructions.

The Heavy SR is a clip-fed bolt-action blaster similar to the N-Strike Mega Centurion. It is based on the Heavy Sniper Rifle weapon from Fortnite with a color scheme based on the Red Camo wrap. It features an integrated bipod under the barrel, and a single tactical rail where the included scope accessory attaches. There is a single sling attachment point in the stock.

The blaster will not fire if the barrel is not assembled.

It was first discovered on the back of the packaging for the B-AR. 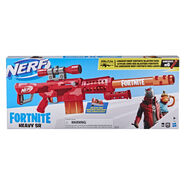 The packaging for the Heavy SR. 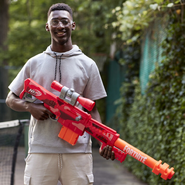 A model posing with the Heavy SR. 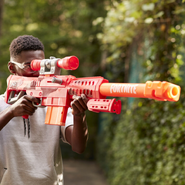 A model aiming the Heavy SR.