The Heatseeking Scope is a Buzz Bee scope that was released in 2017 under the Air Warriors series. It requires three "AA" batteries to be operated.

It comes packaged with the Thermal Hunter, Thermal Zenith, and the Adventure Force Thermal Tracker.

The Heatseeking Scope is a Buzz Bee tactical rail accessory. As its name suggests, the Heatseeking Scope is a sight that is able to detect heat signatures of living beings it is being pointed at. The bottom of the scope features a plastic element that can be seen through, similar to reflex-style sights such as the Red Dot Scope or Red Dot Sight. A green dot is projected onto the transparent plastic, and turns red whenever the scope detects higher heat signatures.

There is a "set" and "mode" button at the top of the module, as well as an on/off switch. The "set" button calibrates the sight to the surrounding temperatures. This is important as without calibration, default settings may cause the scope to confuse a stationary object with an actual human when the surrounding temperatures are higher. The "mode" button simply toggles the scopes thermal capabilities on and off, turning the dot blue and allowing it to be used as a regular reflex sight.

The Heekseeking Scope's thermal capabilities have been advertised to work up to sixty feet (eighteen meters) away.

The Heatseeking Scope is compatible with the following blasters: 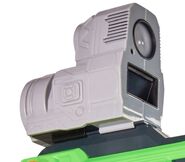 The Heatseeking Scope attached to the Thermal Tracker.

A stock image of the Heatseeking Scope. 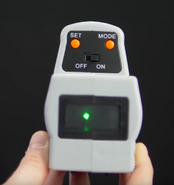 A green dot indicates that the scope does not detect any heat signatures.
(Screenshot from Coop772's review) 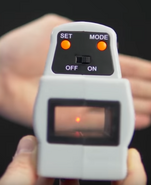 A red dot indicates that the scope detects a heat signature, in this case, from a human hand.
(Screenshot from Coop772's review) 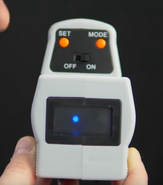 A blue dot indicates that the heat-seeking capabilities have been disabled.
(Screenshot from Coop772's review)
Add a photo to this gallery
Retrieved from "https://nerf.fandom.com/wiki/Heatseeking_Scope?oldid=189056"
Community content is available under CC-BY-SA unless otherwise noted.