The Head-to-Head Blaster Pack is a BOOMco. blaster set that was released in 2014.

It was first unveiled in March 2014 alongside the first BOOMco. wave of prodcuts.[1] Original production shots showed red and green Smart Stick rounds coming with the blaster set, however the rounds are blue and red in the final production set.

In many international countries it is known as the Superbattle Set. The reason for the change in title is unknown. 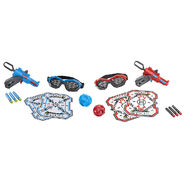 The contents of the Head-to-Head Blaster Pack.

The international packaging of the Superbattle Set.
Add a photo to this gallery

Retrieved from "https://nerf.fandom.com/wiki/Head-to-Head_Blaster_Pack?oldid=166063"
Community content is available under CC-BY-SA unless otherwise noted.