For the original iteration of the Hawk Eye, see Hawk Eye.

The Hawk Eye is a X-Shot blaster that was released in 2018.

The 2018 Hawk Eye is an updated release of the Hawk Eye, with improvements to performance. It features a redesigned shell, which includes changes to the front muzzle and barrel area, and to the integrated shoulder stock, which now stores additional extra darts (four on top, and four on either side). When the blaster is fired, the stock retracts back into the shell slightly, and kicks backwards, creating a "recoil" effect.

A later re-release of the 2018 Hawk Eye improved performance further, pushing it to an advertised firing range of up to ninety feet (twenty-seven meters).

It was re-released under the X-Shot Ninja series as the Quick Scope. 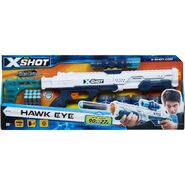 The packaging for the Hawk Eye, advertising a firing range of ninety feet.

An infograph of the Hawk Eye and its features.
Add a photo to this gallery
Retrieved from "https://nerf.fandom.com/wiki/Hawk_Eye_(2018)?oldid=211229"
Community content is available under CC-BY-SA unless otherwise noted.