The Hawk is an Air Zone blaster.

The Hawk is a bolt-action clip-fed blaster that is loaded through the use of shells. As darts are fired, the shells automatically eject out of the right side of the blaster. It features an integrated shoulder stock, which has a spot to store up to four shells and darts at a time.

It was re-released as The Hawk with two different color schemes.

The Hawk has been released with the following color schemes: 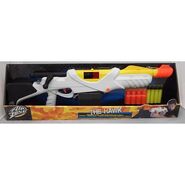 The packaging for The Hawk.